I hope so! Drinking is such a fixation, don’t you think? I mean, wherever you go, people are drinking or buying drinks or wanting a drink. Huh? The sun is shining, the birds are singing, and people want to sit in a smoky pub and drink. I don’t get it. Generation Z gets it!

This is the NOW generation – our kids who were born between 1997 and 2012. That makes them between the ages of 9 and 24. It seems that this generation prefers clean living, technology, board games and silent discos. What? Yes, this generation is also an indoor breed of human who talks using thumbs on devices and work from home or shared office choices.

Let’s set the scene a bit.

The Generations of Today Baby Boomers – that is the current 50-something year old until 70-something-year-old crowd. They were born between 1946 and 1964 and many of them are our parents or siblings. In my experience this generation loves drinking!

Generation X – these kids were born between 1965 and 1980 and are now between the ages of 41 and 56 (EEEK that is ME!) and yes, we liked to drink. This is the age where we have hit midlife and most of us are in a crisis. Many of us don’t recognise we are in a crisis, and many of us drink to hide it. The rest of us are trying to find their meaning in life through esoteric retreats, spirituality, meditation, and communing with the spirits.

Generation Y – these Millennials were born into the crazy 1980s and 1990s when pop music was in, and Mandela became South Africa’s first black president. These youngsters are still only 25 to 40 years old. They don’t like drinking during the week but prefer to have a few social drinks with friends on the weekends. They don’t want a life controlled by alcohol but want to try new things like magic mushrooms, silent discos, and botanical drinks. They like to wake up clear-headed and ready for the next selfie. In addition, Millennials cannot afford to drink!

Those who can afford it, tend to binge drink: in a survey by FHE Health, it was found that “As for the most drinks consumed in one sitting, the most common max for men is a whopping 12 to 15 beverages, which is ripe for Millennial alcohol addiction. In comparison, 3 to 4 drinks were the most common for the highest percentage of female participants. Over 3 percent of men say their alcohol consumption consists of 25 or more drinks in one sitting, though no women have done so.”

This is the contradiction with this crowd – some don’t drink at all, and others binge drink.

Generation Z – these babies were born between the years 1997 and 2012 and they are still very young. Most of us have kids in this generation and we are their ideal role models. My parents drank a lot – they were alcoholics in retrospect – and we three kids were brought up to believe that drinking was normal and fun. So, as a parent to this generation of kids, I am very aware of what they are absorbing and becoming. I was able to stop the drinking cycle in MY family but my husband is a binge drinker so that is being noticed by our two boys!

This generation is noticeably sheltered by their parents and in my experience, there is much more danger out there in the world to worry about. First of all, these kids do not have money and are far less independent than previous generations – which had to just get out, study and work and make it happen.

Generation Z tends to live with their parents until sometimes into their 30s. They do not drink as much as their parents do or did and they prefer to be online, chatting to friends via social media.

Remember that Covid 19 forced our kids to be indoors and isolated for two years which had huge social and psychological impacts on them. According to an article on Flux called Teetotalism – Why Generation Z is choosing good, clean fun, this generation is choosing alcohol-free drinks more than alcoholic drinks.

“Instead of hanging out at bars or nightclubs, Generation Z can be found attending juice crawls and silent discos – or even staying in and playing marathon board-game sessions with friends at home. In many ways, Generation Z is pushing back at the generations who have come before them by rebelling against rebellion.”

Their survey found that these young people cannot afford to drink! There is also a movement towards health and wellness and the Covid epidemic has accentuated this. After two long years of lockdowns and ill-health, people want their lives and futures back. Our kids do not want to be like their parents, drinking, overweight, and unfit! There is another generation rising too, Generation M – the conscious Muslim consumer who does not drink. Wow!

I am very glad that this movement could mean the rise in alcohol-free drinking and sober party events and themes. No hangovers, no alcoholic cycles where weekends are just an endless cycle of drinking due to guilt and the false beliefs that this is what we all do and it’s fun.

It is fascinating to know that China is a hotspot now for no alcohol or alcohol-free drinks! Africa is also a hotspot for such non-alcoholic drinks while the Middle East has always been a no drinking zone thanks to the Muslim influence there. Businesses can now target these markets with specialised non-alcoholic brands.

Did you know that the World Health Organisation (WHO) has found that the number of alcohol drinkers globally has gone down by 5%? Alcohol companies are suddenly all jumping on the alcohol-free drinks bandwagon and producing 0% gins, mixes, and wines!

The Conversation notes that “This is not a fad buoyed by addiction and recovery stories. The millennial- and Gen Z-driven trend is seen as part of a burgeoning wellness movement, a desire to have social gatherings less focused on alcohol (and the next morning’s less fuzzed by aftereffects), as well a shift toward abstemiousness more generally.”

Is Drinking a Trend or Going out of Fashion? 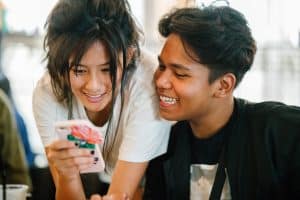 Restaurants and bars are wondering if this is a movement that is going to stay or just a trend for now? They have to spend a lot of extra income on fresh fruit to make extraordinary mocktails! There is waste produced, and time needed to do this. The youngsters who are driving this trend are the same youngsters who are social media and smartphone aware, even to the point of addiction. They like to hang out in internet cafes and places where they can be on their devices while sipping a healthy smoothie.

On the other hand, many young people have spoken candidly about the stigma of NOT drinking – if they don’t drink at parties they are ridiculed as being boring and not IN. There is so much pressure to drink that these teens are excluded and feel as if they don’t belong. The stigma has a lot to do with the societal pressures to be a man and to be cool and to ‘live life to the full’. We all feel that pressure to live it up and make every moment count! But why do we have to be drunk to do this?!

“Nonetheless, we can expect to see a growth in tolerance toward different drinking behaviour, as more people decide to drink less. This may unlock all sorts of possibilities when it comes to promoting moderate drinking across the population at large. The rise in interest in drink-free challenges, for example, and healthier lifestyles more generally, suggests the cultural climate is ripe for putting non-drinking centre stage in public health promotion materials.”

I am still not sure whether drinking is going out of fashion. There is definitely a global change going on in the way people perceive alcohol and its effects on them. In my parents’ day, drinking was the accepted norm and getting pissed as deemed hilarious. In my day, I see and talk to many people in their midlife who are uncomfortable with drinking. They are discovering that drinking is in fact a social ill and a sign that something is not quite right in their lives.

You may be a drinker, or a non-drinker, or recently sober – send us a comment and tell us how you like to socialise.