If Drinking is So Bad For You, Why is it Legal? Teenagers and Alcohol

If Drinking is So Bad For You, Why is it Legal? Teenagers and Alcohol

“Is alcohol consumption of any benefit to humans? If not, why aren’t we thinking about banning it forever?”  A child from India asked this pertinent question on the Conversation, participating in their Curious Kids series.

She acknowledged that while drinking alcohol is a problem globally, drinking small amounts could be beneficial to adult health. But she balanced this with the risks of drinking alcohol.

Why Should Teens Avoid Alcohol?

“Even though alcohol is legal for adults, children and teens should completely avoid alcoholic beverages. Generally people should also not start drinking alcohol because they think it might be good for their health. And adults who choose to drink should do so in moderation and understand the risks.”

It seems that banning alcohol has not worked. When our South African government banned alcohol in 2020 thanks to the Covid lockdown, it did help in some ways: hospital emergency staff were freed up to assist Covid patients when there were fewer cases of alcohol abuse being admitted. But most people turned to the black market or made their own.

Where there is a will, there is a way. People will drink if they really want to. Everything in moderation, right? But what if you are an addict and it is all or nothing? If there was no alcohol, there would still be herbs, and drugs and cigarettes and vapes. Let’s get back to the teenager problem with alcohol.

Why DO Teenagers Drink?

Skeer added that when teenagers drink a lot, they become more impulsive and reckless. So why do teenagers drink and how young do they start? In South Africa, we have numerous social issues and many of our teens come from broken homes. Homes where there is addiction, violence and extreme poverty. These kids turn to alcohol, other drugs and gangsterism or the streets when they have nothing else. There is also a sense of rebellion as a teenager.

The privileged kids are allowed to drink with mom and dad. In South Africa (as in many different countries worldwide) drinking alcohol is regarded as something acceptable when people gather socially. Have a beer around the braai, have a whiskey watching rugby and drink wine with a sea view. Some people gather in pubs and shebeens to chat and share their days’ events.

It all sounds hunky-dory but in reality, many of these drinkers take moderation too far and it turns into over-consumption. Many people do not drink in the week and then drink a lot during their weekends. This is called binge drinking and it has many problems. Binge drinking (drinking several drinks rapidly, in a few hours) leads to reckless behaviour and often to long-term dependence on alcohol. 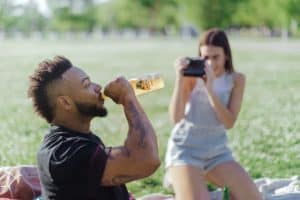 Many teenagers have an affinity for binge drinking. Many teenagers are allowed to drink at home “under supervision” at a young age because their parents think this will contribute to moderate drinking habits later on. Not so, as these teens tend to be the drinkers later in life.

I remember my own life as a teenager. My parents were drinkers, and we grew up believing that alcohol was acceptable and part of the fun times in life. We were allowed to drink at the tender age of 16, tasting wine on the wine route with my parents when we did a road trip to Cape Town.

My sister loved to go out with her friends and drink. She got involved at the age of 18 with a group of kids hooked on dagga. From there her life was all about drinking and she got involved in drugs too. I was more of an introvert and while I drank frequently, I stuck to wine. We are both sober and happy now but we realised the cons of drinking and were able to change our lives. Many other people are not so lucky.

What a pity because the health risks are many and dangerous. According to the UK National Health Service, “drinking alcohol can damage a child’s health, even if they’re 15 or older. It can affect the normal development of vital organs and functions, including the brain, liver, bones and hormones.”

Research shows that when youngsters start to drink alcohol as young as 14, not only do they impact their health and immune systems, but so too do they hurt themselves and others (physically and emotionally). Underage drinking is associated with depression to the point of suicide, violence and general risky behaviour. Kids who drink tend to indulge more in the pleasures of sex, drugs, law violations and lack of employment.

Take Responsibility for your Kids

I am pleased to see that the South African government bans drinking under the age of 18 and fully supports the Association for Alcohol Responsibility and Education (aware.org). The alcohol industry displays their conscience here around the issues of drinking in excess. They offer useful resources for parents and educators alike. Kids who drink face daily dangers and are the cause of daily dangers.

There are guidelines around drinking for teenagers that all adults should be aware of. No child should drink. But if they do, the youngest a child should try alcohol is 18 in South Africa, but in the UK it is 15. At this young age, teens should drink one drink a week maximum. There should always be an adult who cares in attendance. As responsible adults, how should we talk to our kids about alcohol?

Use positive incentives and a realistic approach. Be open and honest about the pros and cons of drinking. Are there any pros? Set limits and times and agree on boundaries that you can all stick to. Ask your teens who they hang out with and do your research on their friends in a subtle way, just so that you understand these kids too.

The UK NHS offers these tips to chat to your child:

What Do I Do if My Child Comes Home Drunk?

If your child does come home drunk one night, the worst thing you can do is to lose the plot and rage at them. The advice from drinkaware is to “take a deep breath.” Never chat to your child WHILE they are under the influence. Make sure they get into bed and thank your lucky stars that they are safe.

Chat to your child the next day. As them to tell you what happened and gauge their response to their own drinking. Are they proud of being drunk or ashamed? Tackle the issue the next day head on – let them eat their breakfast and get ready for the day, making sense of their hangover and what happened to them. Tell them exactly how you are feeling and ask them how they are feeling. Then go over the agreements set about drinking and what the punishment and consequences should be.

Drinking in South Africa is a huge problem and the youth think it is great to drink. It is unfortunately these same youth who then grow up with skewed values and beliefs.

Let’s take a look at the reality behind alcohol and what it can do to our teens.

What can alcohol do to our teens:

What is your responsibility as a parent? Can you be there for your teenager? Why not join the Spring Sober Challenge this year and start afresh? Ask your teen to do it with you!