What the Doctors say about Drinking Alcohol and Aging

What the Doctors say about Drinking Alcohol and Aging

Drinking makes you old. Within and without. But how? What are the effects of alcohol on the body and mind, and do we age when we drink? Let’s dig deeper and see what the doctors are saying about drinking alcohol and aging.

What is the Epitome of Health?

I think we should start, though with a good definition of health. For me, personally, good health means more than just diet. It is a holistic approach to life where body, mind, spirituality, and emotions are in a healthy balance.

I always think back to the prehistoric people (‘cavemen’ for want of a better word) who lived in tune with nature. They rose at dawn, went to bed at dusk – which was seasonal. They ate the fruits and vegetables and meats that were available – in season. They were always on the go: hunting, walking, caring for the kids and each other, cutting down trees, making fires and more. They were surviving.

What went wrong? Life is way too easy now: supermarkets, cars, advertising, money, and gadgets. We have something for everything. We are in touch with each other non-stop. Everyone knows everything, even our two-year-olds! We have moved completely away from living in tune with nature and we are stressed and too into technology and man-made foods. When last did you pick a fruit or vegetable from your own garden? How many plastic packets and boxed foods do you buy daily? PROCESSED foods kill.

Too Easy and Too Addictive

The other side to the equation is the additives and the addictive substances that people are now increasing hooked on. Alcohol, drugs, over-the-counter pills, sugar, cereals, and breads. So many nations things that eating like the Americans works. Fast food does not work, people!

Let see what the doctors say about drinking alcohol and aging. The Drinkwise website reckons that getting old brings in its own complications anyway. Older people are on more medications for hearts, blood pressure, aches and pains and other things. Health is known to deteriorate as we age. All we can do is maintain our energy levels and make sure our immune systems are wired to fight disease.

Did you know that getting older means that our muscle mass disappears under more fatty tissues? So, the alcohol we drink tends to have a higher blood alcohol concentration (BAC) than a younger person who drinks the same. The alcohol also takes longer to move around and out of the body. The liver takes longer to metabolise the alcohol which means that the liver is more at risk.

Older people who are on medications and drink could find that the alcohol clashes with the meds and causes uncomfortable side effects. Also, the medications may not do their work. As we age and drink, we tend to have more accidents – on our feet or in vehicles. Aging in general causes impaired coordination, memory, sensory reactions, and reflexes so be careful when drinking as this is exacerbated!

One of the main visible impacts of aging is of course our skin. Who wants to get wrinkly with dry skin? Some people age well and gracefully, others turn to the plastic surgeons and try to find that magic elixir to ‘forever young’.

The before and after pictures of someone who was drinking and the stopped, are so revealing. Puffy, stretched dry skin. Dark rings under the eyes and pimples popping out here and there. Remember that alcohol is a toxin. You body does not need or want alcohol which is an alien substance.

People who already have skin conditions like psoriasis and eczema or rosacea could suffer even worse symptoms than ever. I know that my mother, who has psoriasis and is an alcoholic, suffers terrible bouts of the skin disease which has also found its way into her joints. Her legs are purple with lack of circulation and burst capillaries. Drinking plenty of water is hydrating, alcohol is dehydrating.

Another waning sign about alcohol and aging is the sleep patterns disruption. We all need sleep for optimum health. The article on WebMD notes that alcohol causes unnatural disruptions to our sleep patterns, especially if you drink before bed. You may fall into an initial deep sleep, but thereafter, you wake up in the early hours and battle to sleep again.

Your liver is trying to process the alcohol and your breathing is compromised. Sleep apnea is one of the effects of drinking. The more a person drinks before sleeping, the worse it is. Insomnia causes other health issues such as risk of stroke, asthmas attacks, seizures, weak immunity, inflammation, diabetes and hear disease. Mental health also takes a blow with threats of depression, confusion, anxiety, and frustration. 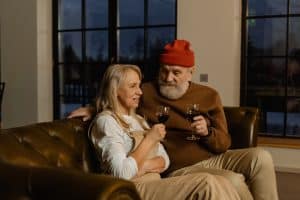 The bottom line is that lack of sleep ages the person and, in addition, older people who drink cause more insomnia in their own lives than ever before! One of the main ways to stay young is to increase our intake of antioxidants. Drinking alcohol is aging because it causes oxidative stress on the body. The liver battles to metabolise the alcohol and the body battles to deal the alcohol in other ways too.

We all know that drinking alcohol causes weight gain. People who drink tend to eat badly – too much or too little. Alcohol itself consist of empty calories. It is known, however, that chronic alcoholics actually lose weight. Losing weight once you stop drinking is a huge blessing and adds energy and value to your life!

Research has shown that drinking alcohol, no matter the amount, can lead to aging. It is also the cause of potential deadly or dangerous situations. Alcohol impacts judgement and mental clarity. Older people are already losing their ability to judge things like distance, speed and safety protocols.

In summary, drinking alcohol causes aging, yes. It also affects health in numerous ways. The more a person drinks, the more they will age and compromise their health. Remember too that older women are more sensitive to alcohol than men are.  What is your takeaway from this blog? Stay sober, safe and young!

Janet Gourand, Founder of Tribe Sober, gave up drinking at age 63, proving that it’s never too late to change your life! Can you believe that now six years sober, she is thriving in her alcohol-free life?